The older I get the more I’m gravitating more towards text based games. It all started when I got my PS-Vita. I played a few of those types, most notably Sweet Fuse and Steins;Gate. Another game I played, and fell in love with was a little indie game called VA-11 HALL-A: A Cyberpunk Bartender Action.

The plot follows Julianne Stingray (or Jill for short), our bartender, and the gameplay part has her making drinks for patrons. Each patron has their own unique story and most will return during the 19 day cycle. Some patrons will be direct with their orders, some have a regular drink and others want a certain flavor. It’s fun mixing drinks and with some drinks, you can choose how much alcohol (if any) you want to put in.

As suggested from the start of the game…

This game is best played getting comfortable. Grab some drinks, some snacks, and enjoy! 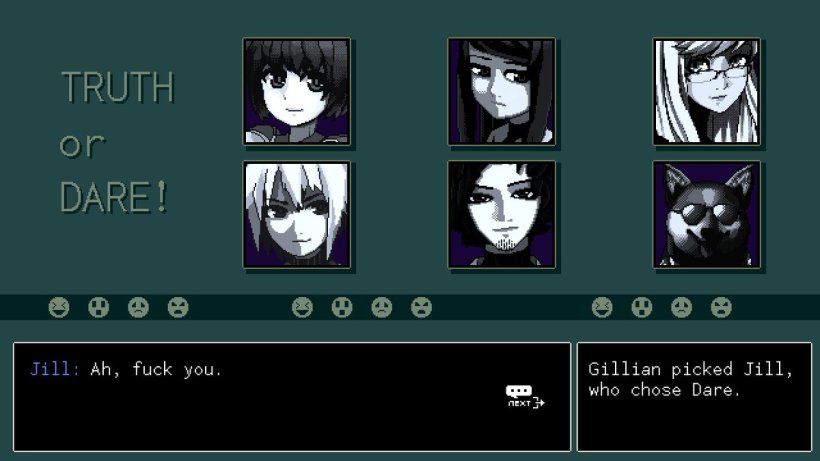 This game is set in the future in a town called Glitch City (a city of social advancement). Va11halla also has all of my favorite things that make a great video game. See below:

So with this game set in the future, what do you expect your clientele to be? Normal people? Hell no. Your clientele consists of corgis, robots, people with cybernetic enhancements, a talking brain, etc. There’s also Gillian (co-worker) and Dana (boss) who help out at the bar. You also get the freedom to select the music for each day (did I mention that music to this game was great).

Va11Halla was such an easy game to pick up and play. Mixing drinks are simple and at the very end of the day you earn money and can buy Jill things that will keep her from being distracted at work. Towards the end of the game you have to save like $10,000 for rent so there were maybe 2 days where Jill was distracted, but it didn’t make difficult, she would just forget a drink order.

Now, on to the characters. My two favorite characters are Dorothy Haze and Alma. Dorothy is a Lilim, who are androids with a free will. She is a sex worker and is very talkative about her position and which leads to some hilarious conversations/moments. Anytime Dorothy showed up, you knew you are in for a good time.

Alma is a hacker and one of the characters you really get to know on a personal level. She is unhappy about her life due to family drama, which unfolds in a 3 part trilogy (as far as I remembered).

There were also patrons that I didn’t like but got better as the game progressed (I’m looking at you Virgilio). As you progress through each day you learn more about the clients as I previously said and each of their stories unfold as you do your job. The story also progresses with Jill as well and we learn more about her character and it’s on par with some the patrons. I won’t spoil any of it but I enjoyed the ending.

For this play through I went with the Switch version because playing it on a big TV is always a plus. It was nice to sit down after a tough day at work and just relax/mix fake drinks. I also did not 100% beat this game but it’s a game that I play every year so I think I’ll try to complete the game later on the VITA (get that nice Platinum trophy).

I’m looking forward to the sequel game N1RV Ann-A, which references do pop up in this game. I highly recommend you play this game. If cyberpunk adult humor with little action is your thing then pick this game up.

Anyway, that’s all for this post. Thanks for reading. Not sure what I’m gonna play next but I still need to clear out some space on my Switch.

Hope you all have a great day!