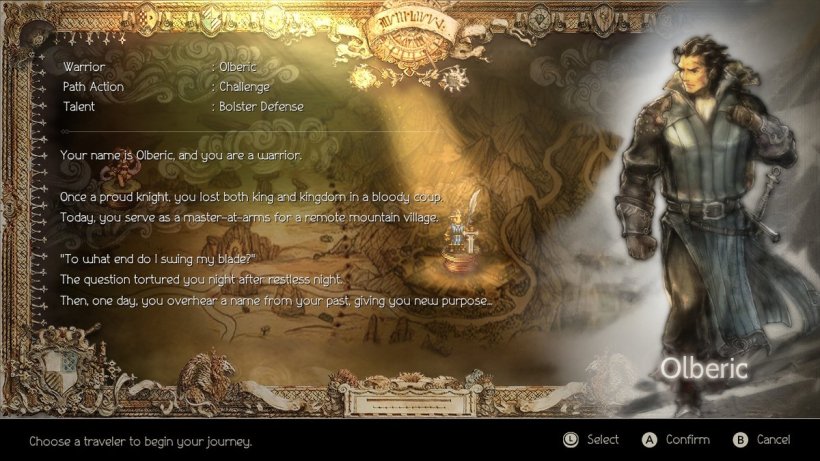 I’m a little less than 6 months late to the Octopath party but I finally started playing the game and it’s everything I wanted it to be. Simple on the story with a crap ton of characters with their “micro-campaigns.” I did download the demo for the Switch, with its 3 hour play time but got distracted by other things at the time so I never got around to playing it. 5 months later, Christmas came and I was finally able to carve some time out to start on the story.

A lot of time was spent on choosing which character I should begin with. I was going to start the game off with Cyrus, because I like my scholar type characters. I decided against it and chose Olberic because I like my strong warrior characters that can swing a sword and his backstory tale was entertaining. Plus, he had a sword and he kicks ass. I’m never good with mage characters (sorry Cyrus). I was also intrigued by the backstory with Ernhardt (Gustav) and I can’t wait to see how his story progresses.

After Olberic’s chapter, I had to choose which character to venture out to next. I chose Primrose, who is my favorite character in this series so far. Her tale is of revenge as she is hunting for the 3 people who killed her father (à la Kill Bill). She’s a dancer, working off her debt, and she’s just biding her time to strike back at the people who messed her life up. Her little introduction was the most satisfying, because at the end she fights her ‘boss’ Helgenish and it was great bringing him down.

On a side note, while I was on the route to the 3rd character, I ended up fighting a Cait. I beat the enemy and my character’s levels increased by 7 (level 14-15 for both characters). I ended up taking a different route and went back to Cobbleston and onwards to meet Tressa.

Now Tressa’s story wasn’t kinda blah. I’ve seen and played this type of story many times before. One distinct thing though was the boss fight with Mikk and Makk, because I sucked at that fight. I don’t know how I managed to beat it because all of my strategy tactics were thrown out of the window once Mikk or Makk changed their defensive position and my attacks towards either of them hit the other person so I couldn’t do the successful break attack. I was so mad. But if that’s any indication on the future boss fights, then I’m fine with that.

Once I finished there, we were on the road to Cyrus. Again, not a remarkable story, even less remarkable than Tressa’s. We found an expensive book stolen by a colleague, everyone also hated Cyrus and Therese is a damn rumor mongering asshole. Cyrus is forced to take a sabbatical because Therese is throwing up some rumors of him having relations with Princess Mary. Cyrus finds the break a blessing and vows to find this book “From the Far Reaches of Hell.”

So here we are, four characters in, with four more to go. Before the next character I plan to grind a whole lot to upgrade armor and weapons. The next character is Ophilia, not sure who she is replacing (likely Cyrus).

I’m really enjoying the simple plots for each character and the battle system makes the random battles enjoyable. Also the art style is super beautiful, but you should already know that if you’ve played the games.

Anyway, I’ll be back with my thoughts on the remaining characters. As of right now, here are the rankings for character introductions ranked from favorite to Cyrus.

See you all next time!